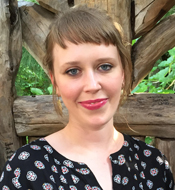 In November, Southern Studies student Amanda Malloy emerged victorious as the Grand Champion of the University of Mississippi’s Three-Minute Thesis competition. In February, she traveled to Charlotte, North Carolina, to represent the university at the 3MT competition hosted by the Council of Southern Graduate Schools. Malloy was one of only roughly forty students invited to compete at this level.

Throughout her career, Malloy has made it her business to see art through two lenses: cultural context, and the physical lens of William Eggleston’s camera. Pursuing her Master’s in Southern Studies, Malloy has chosen to focus on the Memphis native’s work representing the South during the critical flux of the 1960’s and 1970’s.

Most photographers of the time focused on either a romanticized view of the South, full of rocking chairs and mint juleps, or its poverty-stricken agrarian regions. However, Malloy found that the focus of her thesis was more concerned with depicting what she calls “his South.”

It was this program differentiation from other photographers that drew Malloy’s interest to Eggleston. Beginning her Master’s, she intended to focus on folk or intuitive art, and she didn’t know much about photography, much less specifically Southern photography.

On her shift in interests, she said, “I’m interested in Southern art in general…But pretty much from the beginning, I wrote one of my first papers on Eggleston, not really sure where to start, and once I finished that, I just realized how much more I wanted to research. More questions just kept coming up.”

Far from allowing her academic research to be polarized from her professional work, Malloy also works for the Mississippi Arts Commission, writing for their online publication, Mississippi Folklife. In her capacity as Visual Arts Editor, she travels around the South, interviewing artists, and writing about their works.

Malloy considers her approach to the study of art and art history distinct from the status quo, thanks to her chosen course of study. While the focus of her undergraduate studies was on Art History and Classical Studies, she feels that it is her Southern Studies education that gives her an edge.

She said, “Because I have a Southern Studies background, it means I study art history in a contextual way…I want to learn about the artist and where they came from, what kind of life they had, and how that informs the kind of art they create, which not everybody in art history necessarily follows.”

On the subject of her discipline, Malloy applauded the program for its diversity and breadth, saying, “Southern Studies is so interdisciplinary. We have strong ties to English and to History. We have a whole food ways department, a documentary department. We have so much.”

Malloy cited Dr. Kris Belden-Adams from the Art History department as a special influence, saying that Belden-Adams helped her understand the work of William Eggleston in the broader context of the South.

For her part, Dr. Belden-Adams has certainly enjoyed working with Malloy. Of her former student, she said, “I worked with Amanda in an Independent Study class in the fall of 2015, and had the pleasure of watching her develop a body of research…Amanda is just wonderful. She’s sharp, thoughtful, and very personable. I am so proud of her work!”

Moving forward, Malloy originally intended to move into a professional field but has recently decided she would like to stay in academia. She plans to apply to Ph.D programs in Art History beginning next year.

She also intends to continue her research on Eggleston, who still lives in Memphis, but she hopes to do it from the Northeast. According to Malloy, Eggleston’s first show was at the Museum of Modern Art in New York City, and his photographs were especially problematic to the northern audience. Not only did he work in color, previously reserved for advertisements and photojournalism, he also portrayed the South at a time when it was becoming less agrarian and more suburbanized, thus more homogenous with the rest of the country.

This representation proved frustrating to Eggleston’s audience, who Malloy theorizes did not enjoy having their traditional, likely stereotypical views of the South challenged by this new information. This is, perhaps, why Malloy is now increasingly interested in studying what she calls “Northern representations of the South in photography”.

As for her plans to study Southern art from afar, Malloy believes one need not be in the South to study it. Though, she said, “if there were [a Southern Studies Ph.D program], I would definitely stay.”

Malloy’s 3-Minute Thesis presentation is now publicly available on Youtube, on the University of Mississippi Graduate School Channel, along with other winning presentations from UM students.