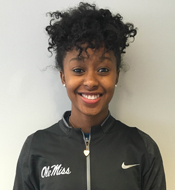 Some people believe in fate, some rely on hard work, and some people strike a careful, perfect balance between the two. Brett Ball, first year Integrated Marketing Communications Master’s student, is a champion of that balance.

Beginning her undergraduate career at the University of South Carolina, Ball was set to play basketball with a full scholarship. Her first few weeks of summer training went according to plan, but health issues arose that brought her career to a tragically early halt.

“I had some heart complications,” she said. “I went to a doctor, and they diagnosed me with a heart condition. They told me I couldn’t play anymore.”

Just like that, Ball found herself nine hours away from home and without a sense of purpose.

She said, “I just thought, ‘I came here to play basketball, and I’m not really good at anything else!’ I didn’t know what else I could be good at, because my whole life had been so consumed with sports.”

The coaches continued to honor Ball’s scholarship, but she quickly found herself bored at practices, unable to play and feeling disconnected from the team. Fortunately, someone from the media team floated the idea of having her act as an embedded reporter, recording team activities on a small flip camera she could carry in her pocket. And it was there that “Ballin’ With Brett” took its first breath.

Ball credits the team for her early success. She said, “It all worked together because we had a team that had personalities, and when you have personalities and a camera, those two things make a world of difference. That’s when you can produce good stuff.”

What began as a project that felt like busywork, something that would allow Ball to feel useful and contribute to the team, soon began to line up with something close to her heart: injured athletes.

“I had always been interested in athletes’ response to injury,” she said, “and so I started looking for ways to combine that with the media field. Eventually, by about my junior year, I figured out, maybe I can have my own show, interviewing athletes in that position and giving them a platform to tell their stories.”

With this new goal settling into place, Ball began working with Gamecock Productions, learning the finer points of video editing with the goal of being able to tell a story effectively and in a way that others would understand. This clarified direction also brought on the realization that graduate school would be the best next step.

Ball said, “Once I really realized what Ballin’ With Brett could be, that’s when I knew I wanted to go to grad school and study IMC, because I felt like it could help me brand myself…I think the Lord just sent me in this direction, and it all just worked out. And I’ve learned so much more than just what I can apply to Ballin’ With Brett!”

At the University of Mississippi, Ball works closely with Ole Miss Productions’ multi-media specialist Mo Smith. Smith admires Ball’s ambition and dream of giving injured athletes the opportunity to talk about their journeys.

According to Smith, “Brett is an incredibly driven and intelligent person who has a natural ability to relate to all individuals. She is very tough on herself at times, but that just speaks to the drive that lives within her to be great at whatever task is in front of her.”