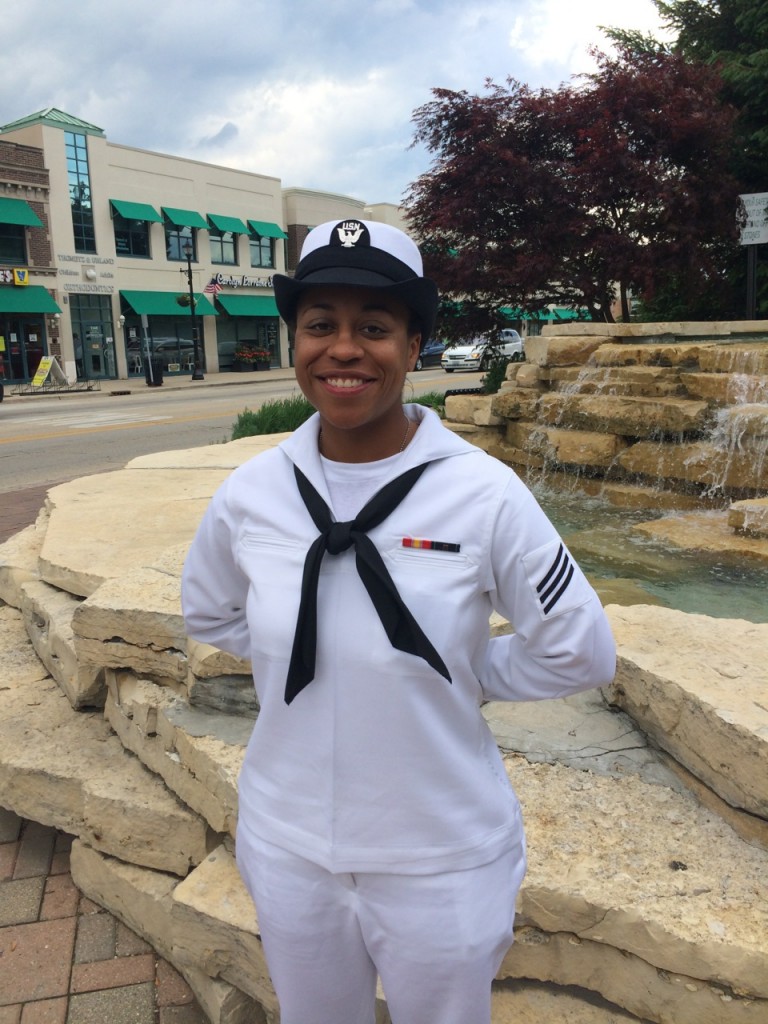 Nicole Sheriff modestly describes her position as Duty Section Leader at Barracks 831, Training Support Center, Great Lakes, Illinois as, “similar to an RA” . By this, she means that her primary duty is the direct oversight and leadership of fellow Sailors, much like a Resident Assistant for university student housing. The United States Naval Service, however, might disagree about the position’s magnitude and level of responsibility. This month, Commander Katie Milligan presented the University of Mississippi grad with a special commendation for her excellent performance while acting as both duty section leader and barracks duty officer. Her responsibilities included direct accountability in the chain of command for 62 of her peers, whether it be for their presence at watch and muster or for their rule violations.

Contrary to what her accomplishments might suggest, Sheriff has only been a Sailor and student in the Navy since May 2015. Prior to her enlistment, she was putting her formal education to good use in journalism in graphic design. Having obtained her undergraduate degree in Communications at Mississippi State and her Master’s in Journalism from Ole Miss, she was well prepared to take on the job world.

Of her earlier education, Sheriff said, “if you build a solid foundation you can only go up from there. The more I’ve worked, I’ve seen more come into play down the road. You may not see it on day one after you graduate, but you keep working and keep having different experiences, and everything falls into place.”

Sheriff characterized her time at Ole Miss as very rewarding, specifically in the then-new journalism school. “The instructors were extremely helpful. We were the first group to go through the J-School. My thesis advisor was Dr. Nancy DuPont, and she was very influential in my journalism career. I always thought Ole Miss has a very solid department. We got to do some really hard-hitting things and also do some research. DuPont was very patient with students and very understanding. The atmosphere was very welcoming.”

The aforementioned Dr. DuPont remembers her old advisee fondly. DuPont said “I was drawn to Nicole because of her positive, never give up attitude. She was a joy to have in class and was the first one to raise her hand to contribute to the class discussion. I never had to prod her to get her work done on her thesis. I am not surprised to hear about her special commission. She is one of those people who is destined for success.”

While no one who knew Sheriff at Ole Miss might be surprised by her achievements, they might well be surprised at the field in which she is excelling. Her current area of study is a far cry from journalism.

Summarizing her position, she said, “Right now I’m training to be a fire controlman, which is more on the engineering side of things, which works more on the weapons, electronics, and computing things behind it. It’s night and day from what I was doing.”

Considering that one of her previous jobs was doing graphic design for the Delta Democrat-Times, “night and day” couldn’t be more accurate. Of her sudden career change at 27, Sheriff laughed and said, “I was looking for something to challenge me in ways I haven’t been challenged before.”

Sheriff also noted that, while there are things she might change about her time in school, she believes it works to her advantage that she started on this path in her later twenties. Speaking of her academic achievement– she has so far earned a 93.07 GPA in Fire Controlman Advanced Technical Training School– she said, “A lot of it has to do with age and maturity. I’ve gone to school already, and I’m doing better now than I did in school…It doesn’t hit you how much it affects your future going forward until you get older. If I could go back into some of those classrooms, I would do some things differently, even though I did well. It’s a direct link to my career now. It’s setting me up for the future.”

Sheriff plans to maintain this level of performance moving forward through her Navy training. “The next move is just to finish A-School strong…Stay on the same path I am, not just pass and get good grades, but really get a thorough understanding of systems and concepts I’ll need.”

In a formal announcement of Sheriff’s commendation, a Naval representative stated, “…her diligent attitude set her apart from her peers, making her an example for others to follow. Seaman Sheriff’s exceptional initiative, perseverance and loyal devotion to duty reflected credit upon herself and were in keeping with the highest traditions of the United States Naval Service.”