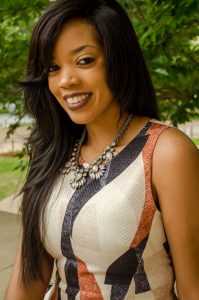 “How can my experience be beneficial to someone else?” This is the question that University of Mississippi Graduate School alumna Ashley Norwood has long asked herself, using it to inspire and inform her work as a documentary filmmaker.

While she was pursuing her Master’s degree in Journalism, an opportunity to benefit others manifested in the form of a class assignment. What started as a written assignment became, through her wealth of information and passion, the subject of her thesis– a project that would soon be seen not only by her classmates, but by students, administrators, and film festival audiences across the country.  Drawing on her experience as a member of a National Pan-Hellenic Council sorority, Norwood created “The Fly in the Buttermilk”, a short film showcasing the NPHC experience on a predominantly white campus.

In her research, Norwood reached out to alumni, past administrators, and other Black Greek Letter Organization members, including charter members. She said, “I traveled as far as Berkeley California…I talked to a lot of ‘more seasoned’ members.”

Additionally, she drew from her own experiences in Greek life at Jackson State, where she received her B.A. in English, and at the University of Mississippi. According to Norwood, at Jackson State and other historically black colleges and universities, BGLOs are a much bigger part of student culture. “Parents and grandparents are members, so children grow up aspiring to be part of these organizations.”

At the University of Mississippi, however, she observed that white organizations are considered the “default”. Norwood remembers a program she once saw on the History Channel about fraternities and Greek life, which featured the University of Mississippi and focused primarily on white organizations. Seeing this lack of information, she created The Fly in the Buttermilk largely to educate those who were curious about BGLOs and show support for current and alumni members.

She described her goal as being “not just a wakeup call for those being negative who may have judgment about the culture of black Greeks, but also for members who might think it’s just the fun stuff…the hard work, the community service, the strength of sisterhood and brotherhood is why these organizations were founded.”

Norwood’s film was shown on campus for about seven hundred viewers and was quickly absorbed into the university canon. This year, it was used as part of Greek Introduction Week and programs at the University of Mississippi, Mississippi State University, and other institutions. She is justifiably proud that her film is “being used as an educational piece in academic universities.”

One revelation the film brings to its viewers is a view of what the true face of southern BGLOs looks like, which can often be misunderstood by others. Norwood described the confusion, saying, “These groups have different personas regionally, almost like west coast people and southern people. [The film] is bringing a different perspective of Greek life to northern states. It’s satisfying to kind disprove ideas people have about the South.”

In her travels, Norwood has encountered plenty of misconceptions about the South and her alma mater, which she is happy to dispell, sharing stories of the support she found on campus. She recounted, “Every time people ask what my experience at Ole Miss was like, I say, ‘I went to the University of Mississippi.’ The first group I got into was the Black Graduate and Professional Student Organization. They strengthend me in times when I felt like that fly in the buttermilk…I definitely appreciate the university, the organizations, the administrators,  and the teachers, because it challenged me in so many ways. I grew independently. It was the first time I was ‘independent’ from my family, not living in the same city.”

Despite its use as an educational piece, her film’s run hasn’t been limited to universities by any means– it was featured at the African World Inaugural Film Festival, which Norwood was gratified to be a part of. Moving forward, she will be hosting a panel and screening in Brooklyn with Reel Sisters on October 5th, and she has also been invited to present at an upcoming film festival in New York. As for the film’s continued performance, Norwood said, “It’s continued to screen in different areas…The number of views has only increased. It debuted this summer online, and I think right now we’re at a growing fifty thousand views.’

For the most part, the film is having the effect Norwood wanted, both at large and at home. She said, “It’s showing change. I’ve seen things change since the documentary came out at the university. It’s being honest and real but that’s what you have to do to create some type of progression. The university is constantly making improvements as far as inclusion…The story was about the University of Mississippi creating more spaces and opportunities to talk about these groups of people, their relevance, their importance, which has never been done before.”

Presently, Norwood works at Mississippi Today in Ridgeland as a reporter. She described the publication as “the state’s first and only non-partisan and non-profit digital news organization….The mission at Mississippi Today is to tell stories that matter, not just who-what-when-where-why.” Since starting work in June, she’s most recently picked up beat for higher education.

Along with her new job, Norwood is still working as a filmmaker: The Fly in the Buttermilk is set to become a series of films. The next film’s subject is still a mystery– though she promises to reveal all soon. She plans to release a short promo in the next two weeks, begin filming in October, and release the film next summer. It will not focus on Greek life but will still center on minority experiences.

Juggling both her job and her directorial efforts can be a challenge. Said Norwood, ‘It’s a little rough, as far as time! As a reporter, you’re always on the go.” Currently, she says she spends easily half the week traveling, primarily to north Mississippi.

Fortunately, her employer encourages her pursuits. “Mississippi Today supports me with everything I’ve got going on. I’m blessed to be working with people who support your passions outside of work and want to support you both ways.”

In the long run, Norwood aspires to direct films, and she feels lucky to have come out of her academic career with something very tangible to show for it. “The number of times people use things they produce in school in life, it’s not that often,” she said.

As for her philosophy on filmmaking, she believes the overall goal is “to use all of our influences and opportunities to tell things in a way that would make people want to do more or research or understand. Provoke some kind of momentum and spirit and morale to make things better.”

Even with the success of The Fly in the Buttermilk, Norwood is still often surprised at how far her star has risen. Recently, a hotel manager in Greenwood, Mississippi, recognized her as a filmmaker, and the experience was as thrilling as it was unexpected.

Unsurprised by her success is Dr. Donald Cole, Assistant Provost and Assistant to the Chancellor Concerning Minority Affairs. Norwood described him as one of her first contacts, someone who made her feel at home and offer help if there was anything she ever needed. He was also a major factor in the making of The Fly in the Buttermilk thanks to his connections with members of BGLOs and administrators.

Of Norwood, Dr. Cole said, “Her flight to success on this venue only needed a few contacts and some minor directions before it began to soar far beyond our initial expectations…I am sure that this film will find itself in the annals of the History of the University. This is what we train our journalist to do, and in Ashley’s case, I am pleased that it happened so early in her young career.”

“How can my experience be beneficial to someone else?” Ashley Norwood has already begun answering her own question, but in all likelihood, much like her first film, the full answer will exceed all expectations.