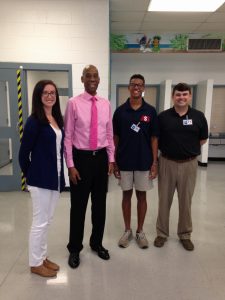 This summer, Rebecca Bramlett, Legal Studies Master’s student, along with her undergraduate partner, Austin Powell, initiated a trial program to instill an entrepreneurial mindset in the inmates of the Marshall County Correctional Facility. With the help of five university professors, they conducted an eight-week class based on the book “Who Owns the Ice House” by Pulitzer nominee and Mississippi native, Clifton Taulbert. The Ice House Entrepreneurship Program is part of the Entrepreneurial Learning Initiative, an organization devoted to building an innovated, driven mindset through training and educational programs worldwide. The project was carried out through the McLean Institute, the primary purpose of which is community service and engagement.

Over the eight weeks, the professors– who came from departments as diverse as Criminal Justice, Higher Education, Sociology, Business, and Legal Studies, and all of whom were trained in the Ice House program– each taught roughly two lessons, and they seemed to learn lessons of their own as well.

“The professors learned too,” said Bramlett, “just getting out of academia and into the real world– and prison is about as real as it gets. I think it was an interesting exchange of learning…Our job with McLean was to connect the university with the community, and we connected them with a part of the community they would otherwise probably never be exposed to.”

Bramlett and Powell were told by the warden that, for the size of their classroom, having about fifteen students would be ideal. The sign-up list, however, had over a hundred names. Of the fifteen inmates they chose for the class, three had life sentences, but the rest will be released in a year or less, making the Ice House lessons exceptionally relevant to them.

Despite the small class size, Bramlett’s team was able to expand their reach thanks to the three men with life sentences. Those three acted as mentors and, every week, would take the literature they’d been given and teach the lessons to more people. According to Bramlett, “They asked for documents to share, for their cellmates and others. So we didn’t just reach fifteen people– the knowledge really multiplied.

One participant had been in prison for thirty-seven years, and he said, “I’ve taken every single class they’ve had here, and this is by far the most usable and most life-changing class that they’ve ever offered.”

One of the eight lessons focused on ideas and actions, and one of the participants found it especially applicable to the plight of an inmate. He said, “All we do is sit here and think. We have millions of ideas!” 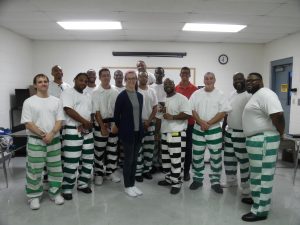 Bramlett concluded, “The fact that we’re teaching them how to put those ideas into action and take the next steps was valuable to them, I think…There’s this concept of bootstrapism– you know, ‘pull yourself up by your bootstraps!’– and it is a little flawed, to me, but I think they saw hope in that.” She described the entrepreneurial mindset as looking at problems and seeing solutions, seeing problems as opportunities.

Bramlett and Powell would regularly stay behind after the class was over and just talk, about topics as intense as the political system and mass incarceration. “It was interesting to be in a room with people who had committed really heinous crimes and be able to connect with them aside from that,” said Bramlett. “We were having these very meaningful and intellectual conversations with people who maybe don’t even have a high school degree. So their intelligence is there, their intellect is there, it just wasn’t nurtured or developed.”

The inmates were acutely aware of how society sees them. One class participant said, “People think we’re invisible. People label us as everything but people. And the fact that you’re here proves that there are people who care.”

The attitude Bramlett and her team took was one of compassion and respect. She believed that the men were all aware of their crimes and were actively paying their debt to society. She said, “It wasn’t our job to make them pay even more. It was to help create productive citizens, so when they go back to the community, they can reintegrate in a positive way.”

All evidence seems to suggest that the inmates appreciated this attitude and responded enthusiastically. “They would come to class more prepared than any college student I’ve ever come into contact with,” Bramlett said. “They were so thirsty for knowledge…They just wanted to engage so much with people in the outside world who were respected and who treated them as people.”

Bramlett hopes that the success of this initiative will inspire and inform others, both as they regard the importance of prisons and the personhood of those incarcerated. The program, she was happy to report, will continue under Dr. Linda Keena.