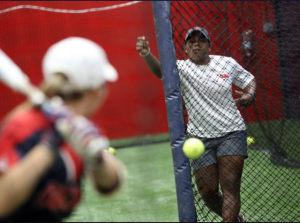 After completing her bachelor’s degree in psychology from the University of Houston, where she also played softball, Kayla Holland decided she wasn’t done with her academics or her time on the diamond. She earned a master’s degree in criminal justice from the University of Mississippi this year and was a graduate student manager for UM’s softball program from 2015 to 2017.

Holland was always the first to arrive for softball practices and the last to leave.

“We set up the field for practice and (tore) down the field after practice along with doing the team’s laundry and pretty much anything in between,” she said.

Though constantly busy and always making herself available to the athletes or coaches, Holland said she believes that being involved in athletics helped her in her academic studies.

She also said it was difficult.

“I missed a lot of class with traveling. It was challenging because my professor and I had to work one-on-one and make sure I did not miss any of the vital material that was being lectured during class time. I had to utilize my resources and make friends in class to share notes.”

When asked about her time as a player and as a graduate student manager, Holland said, “Learning about two different programs [University of Houston and University of Mississippi] and how there was a common goal for both programs was amazing to watch. Both universities focused on academics, playing at the next level, and making sure everyone knew that one is supposed to leave the program better than they found it and as better people, too.”

This past season, the softball team hosted a regional tournament for the College World Series. The Rebels won that tournament and concluded their season after losing to UCLA in the Super Regionals. Much of the success of athletics programs can be credited to the students who work behind the scenes, especially those like Holland.

Beyond athletics, Holland plans to use her master’s degree and join the FBI.

“I have always wanted to become an agent and help put away the bad guys.”

She said if that isn’t her calling, she will return to the diamond and follow her love and passion for the game of softball.