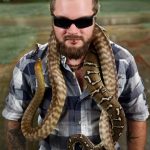 As time moves on, discovering a new species of anything becomes more and more difficult. Ph.D. Candidate Tim Colston proves that it is not, however, impossible. Recently, Colston was part of a team that discovered a new species of viper, Bitis harenna, on the east side of the Ethiopian Rift Valley. The path to this discovery was a long one with an unexpected conclusion.

Colston’s story began when he traveled to Ethiopia in 2012 as a Fulbright scholar to collect data on snake communities along an elevational gradient. Working in the highland mountain ranges in eastern Ethiopia, he learned that there was a species of viper endemic to the west side of the Rift Valley, though there was no hard evidence of any equivalent species on the other side. However, given the similarity of the environments, as well as some stories about a large, charismatic viper in the area, he fully expected to find one. 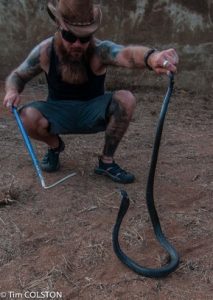 “As far as charismatic goes,” he said, “it just means that when someone sees this snake, they know it’s dangerous, and they remember it.”

Plenty of researchers had looked for this viper in the past with little success. Interviews with locals, as well as a single, unreliable sample from the 1970’s didn’t offer much to go on. But in 2013, some clear-cutting of forest land turned out to offer an unexpected stroke of luck.
Recounting the story, Colston said, “In 2013, one of my coauthors was with his driver who knew he had been looking for the snake. Luckily, they came across one that was in the middle of the road in a newly-cleared road in this mountain area that I had spent months surveying. I had shown the driver pictures, so when he saw it, he said, ‘That’s the snake Tim’s looking for!’ It’s one of the least known snake species in the world, there have been only a handful of sightings. They live in very dense forests, they probably live underground most of the time. With that additional sighting, we were confident in describing it as a new species and trying to garner it some sort of special conservation status so that people don’t go in and destroy that patch of forest.”

Since then, there have been two more specimens collected by Colston’s colleagues in Ethiopia, providing enough biological data to compare this species to the one on the eastern side of the Rift Valley. 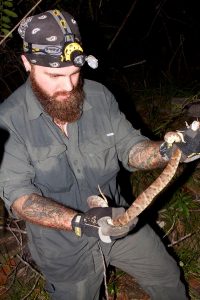 The requirements for describing a species as new varies with the type of animal. “With vertebrates, it’s more of a combination of many things,” Colston explained. “Are they genetically isolated, with some sort of barrier to interbreeding with other species? It can be a hard barrier like the Rift Valley. We don’t actually have the genetic data back yet, so we don’t know exactly what the differences are, but I suspect it’s a fairly old difference. These species have been separated for a while.”

Colston is currently pursuing his Ph.D. in Biology, investigating how snake communities are structured and the evolutionary processes that lead to community formation around the world. So far he has conducted research in Ethopia, Brazil, Mexico, Guiana, and the southeastern United States.

After earning his Master’s Degree from the University of Oklahoma, Colston came to the University of Mississippi specifically to work with Brice Noonan, his major advisor. On his choice of advisors, Colston said, “I knew I wanted somebody obviously very strong in their career, a great researcher, but also someone younger, with a lot of drive and a newer lab. I was his second Ph.D. student when I came. I knew I wanted to work on community assembly, thought I’d keep working in South America and expand from there. Brice has been working in the Guiana Shield since the beginning of his career, so it was a good fit.” 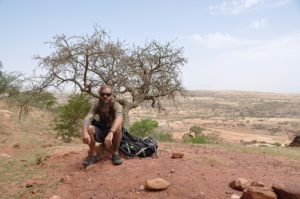 Colston also found an unexpected influence in Colin Jackson and his research in microbial ecology. “My research program has really been transformed by adding this microbial ecology component,” he said. “If I hadn’t come here and met Colin, who knows if i would’ve gotten involved in that? And now, all of my post-doc plans involve microbial ecology.”

“Tim was already a good field biologist when he joined our graduate program,” said Jackson, “and during his time at the University of Mississippi, he’s also become an excellent scientist.”