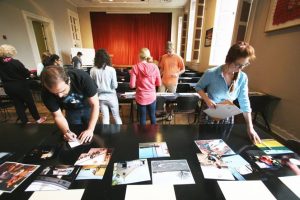 New offerings include a Ph.D. in second language studies, a Ph.D. in social welfare and an M.F.A. in documentary expression.

In the spring and fall semesters of 2017, the University of Mississippi is rolling out three new graduate programs. The Department of Modern Languages is offering a Ph.D. in second language studies; the Department of Social Work will be offering a Ph.D. in social welfare; and the College of Liberal Arts will be offering an M.F.A. in documentary expression, housed at the Center for the Study of Southern Culture.

Felice Coles, professor of modern languages and graduate program coordinator for the new second language studies program, stressed that the main focus of the new offering is teaching — not just in schools but in large organizations. Graduates will have the unique qualification to help companies globalize by learning second languages, making them valued assets to companies looking to expand internationally.

For these first few semesters, Coles said that Mississippi students are the primary focus; the department wants locals to get “the first crack at it on the site. We want to keep the best people here.”

Cohorts will consist of five to seven students, and ideal candidates will be looking to make a real commitment to becoming experts, which Coles believes they will find personally and professionally fulfilling.

The documentary expression program, said Ted Ownby, director of the Center for the Study of Southern Culture, has been created to establish an “effective, innovative place for learning … not just about technical skills but also how to ask and answer questions about the people being studied.”

He said that a problematic aspect of making documentaries is “helicopter projects,” which involve dropping in on a group of people and bringing assumptions and seeking confirmation, which only reconfirms stereotypes. The South, for instance, has sometimes been the subject of this kind of biased project.

Continuing the theme of focusing on the people of the South, the new social welfare program is very much geared toward “responding to some of the complex needs of the state of Mississippi and the region,” said Javier F. Boyas, associate professor of social work and graduate program coordinator.

Boyas said he believes the state will benefit from what he calls “scholars that will expand research and knowledge in the field,” especially given that Mississippians contend with complex co-morbid issues and lead the nation in several unfavorable distinctions.

The second language studies program officially launched in spring 2017. The documentary expression and social welfare programs will launch in the fall.