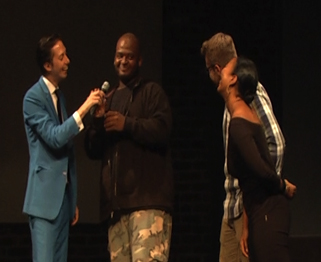 By 8 p.m. on Oct. 13, the Powerhouse Community Arts Center had been overtaken by Oxford’s literati: professors, students and locals, all joined by a love of literature. The crowd was easily double what one might expect for a simple, small-town reading, but this was neither simple nor really just a reading; it was a marriage of literature, comedy and performance art courtesy of three of the University of Mississippi’s best writers. It was the Literary Death Match.

Beth Ann Fennelly initiated the event when she, as M.F.A. program director, realized that the Barry Hannah Fund for Students could use a top-up. The Barry Hannah Fund is used to ease some of the financial burden on English M.F.A. students, and if there’s one thing all graduate students can agree on, it’s that more funding is always better.

While the idea to bring the Literary Death Match to Oxford was new, the event itself was not. Its number of shows performed hovers somewhere in the 400s, climbing every few weeks. While these performances originated in New York City in 2006, they’ve since gone international, finding their way into cities such as Edinburgh, Reykjavik and Hong Kong. In just under 10 years, the Death Match has been welcomed into 16 countries and 57 cities, of which Oxford is now proudly one.

Before the match, the competitors and judges were stowed away backstage as the soon-to-be audience milled around the lobby, looking over tables of books for sale and ordering drinks from the small bar. With the sponsorship of Cathead Vodka, the event boasted a signature cocktail – a sharp concoction of vodka, citrus and mint – that seemed almost an imperative purchase, judging by the number the audience could be seen sipping before and after the show.

At the center of it all were three writers, three judges and one host. Immediately noticeable, as he cut through the cocktail hour in an electric blue suit, was the event’s creator and the host of the evening, Adrian Zuniga.

“My great fear in the world,” said Zuniga on the inception of the Death Match, “is that a lot of people who sit at home are watching TV and checking the Internet and doing everything but reading a book. And then they go, ‘You know what? I should read more.’ So then they walk into the bookstore … and they don’t know what book to buy, so they Google, ‘best book of all time.’ Then they buy that book, and they go home, and after two pages of reading Ulysses, they’re like, ‘[Forget] this, I’m going to go back and watch “Breaking Bad” from the start.’ Our show is like the gateway drug. These authors are the starting point by which you can ascend to Ulysses.”

This was not the only time Ulysses would come up.

They were judged, with a degree of seriousness that few expected, by three judges in three categories. Mary Miller judged the competitors on literary merit, Damien Walsh on performance quality and Jim Dees on “intangibles.”

While all the readings earned the fierce approval of the audience, ultimately only Fennelly and Laymon progressed to the final round. The final round, naturally, was determined not by their skills as writers or performers but rather by a game-show-style competition. Specifically, Zuniga read one-star Amazon reviews of classic novels, and the two authors (along with teammates) competed to guess to which novel the reviews referred. The final answer was, as Zuniga perhaps accidentally foreshadowed in his interview the night before, Ulysses, and it was guessed by a member of Fennelly’s team. The poet received a medal, produced with little fanfare from Zuniga’s pocket, and the Literary Death Match saw its last author left alive.

In addition to raising money for the Barry Hannah Fund, the Death Match had the fringe benefit of making the world of literary readings feel a little more accessible to those not typically involved in the literary community.

“I think it’s good to see successful writers lose, and to laugh,” said Laymon, “because we’re just people who happen to write things. I think the show does a great job of showing that side of us.”

On the subject of the match’s potential return to Oxford, Zuniga responded enigmatically, “We come back if people show up.”