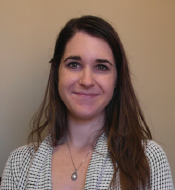 First-place winner of the annual Three-Minute Thesis competition’s master’s division is Sarah Crocker-Buta, a master’s candidate in biological sciences. Though this was her first 3MT win, Crocker-Buta is no stranger to oral presentations, or, for that matter, winning. Just two years ago, she won first place for her presentation at the annual Undergraduate Research and Creative Activity Conference at the University of Alabama, and she’s given six conference presentations since 2012, all of which pertained to herpetology.

Crocker-Buta graduated from the University of Alabama in 2013 with a Bachelor of Science degree. During her undergraduate career, she worked with Steven Secor, associate professor of biology, researching the digestive system of corn snakes (Pantherophis guttatus). The study was her first published work, appearing in Comparative Biochemistry and Physiology Part A in 2014, and related topics in corn snake digestion were the subject of her award-winning presentation at the URCA Conference.

Currently, Crocker-Buta works under Christopher Leary, University of Mississippi assistant professor of biology, examining how the social-acoustic environment and circulating glucocorticoid levels interact to influence the expression of alternative mating tactics in the green tree frog (Hyla cinerea). Specifically, the alternative mating tactics in question refer to satellite males: smaller male frogs that do not produce mating calls and parasitize calling males, mating with female frogs that respond to the call.

Two of her previous conference presentations have pertained to tree frog mating habits, and in addition to the satellite males, Crocker-Buta has also studied the effect of stress on mating males.

“It’s funny,” she said, “we thought it was hormonal, like stress was changing something internally. But really, stress affects their body condition, making the males less attractive to the females.”

On her choice of research subjects, Crocker-Buta said, “I always knew I wanted to work with animals, but it turned out that I’m allergic to pretty much anything with hair or dander. So, I started looking into herpetology. … Luckily, I’ve never really been afraid of frogs or snakes!”

Her fearlessness has come in handy, working in the Leary Behavioral Neuroendocrinology Lab, as research there involves getting up close and personal with reptiles and amphibians regularly. As with most biological research, Crocker-Buta’s work requires a significant amount of fieldwork.

Leary referenced her excellence in fieldwork as one of the reasons behind her success, saying, “Sarah is an outstanding student that loves what she does. She is determined to learn all that she can about how hormones regulate reproductive behavior in frogs, and she really enjoys getting out in the field and working with these animals in their natural environment.”