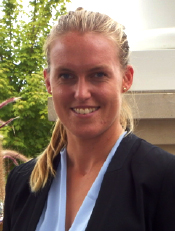 Caroline Rohde-Moe is, in a word, driven. As a first-year graduate student, she attends classes, works as a graduate assistant, works with the tennis team and even babysits. Looking at her current schedule, it’s easy to be bowled over with how much responsibility she has on her plate. Then, taking into consideration everything she’s accomplished, between her undergraduate degree and tennis career, it seems as if this is the kind of environment she thrives in: fast-paced and high achieving.

She joined the tennis team as a freshman in spring 2011 and hit the ground running. She not only helped lead the team to its third consecutive NCAA appearance, but she also won nine of her first 10 matches and four of her last five. Even with her rigorous training schedule and competitions, she still excelled academically, earning a spot on the Dean’s Honor Roll.

By the end of her sophomore year, Rohde-Moe was ranked No. 84 in the nation in singles and No. 4 in the Southern Region. Amid the national and local sports recognition, the academic accolades continued to roll in. She was named an ITA Scholar Athlete, making the SEC Academic Honor Roll and the Chancellor’s Honor Roll.

As her junior and senior years progressed, she climbed the rankings, earning the ITA Southern Region Arthur Ashe Jr. Sportsmanship/Leadership Award, an at-large berth in the ITA National Indoor Championships, the Taylor Medal from the University of Mississippi, a finalist spot for the SEC Boyd McWhorter Postgraduate Scholarship, and a Who’s Who Among American Colleges and Universities distinction. Finally, she graduated with honors in managerial finance and economics.

The next step, following graduation, was to take her skills onto the international stage, where she achieved her career highs in WTA singles and doubles between May and August 2015. But her ultimate career goals, it seemed, were a little more suit-and-tie in nature, as she returned to UM in fall 2015 to pursue her MBA.

One of the strongest motivators for her return, specifically to UM, she said, was the mentor program.

“They’ll match you with someone doing what you want to do, and it’s really helpful to talk to them and learn from them. And it really helps when you start looking for jobs!”

Currently, she works with a UM alumnus, Brandon Blewitt, who works at KPMG.

Another advantage UM presented was the availability of an assistantship with Tony Ammeter, associate dean for undergraduate programs and associate professor of management and management information systems. Ammeter, naturally, has nothing but good things to say about his graduate assistant.

“Caroline brings together academic excellence and a strong work ethic,” he said. “Her tenacity, intelligence and concern for others earn her the respect of those she interacts with. Her combination of integrity and intellect (and a subtle sense of humor) is consistent with those that I value most highly not only as students but as colleagues. It is a great joy to work with her.”

While Rohde-Moe said she will always love tennis, after getting her MBA, she looks forward to going out into the corporate world and looking for a place to put these new skills to work.

“With the way the MBA program is set up, I don’t think any of us should have a hard time finding a good job!” she said.