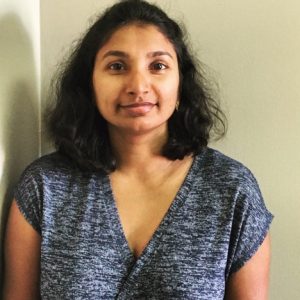 This year, Vedanjali Gogineni, a doctoral candidate in Medicinal Chemistry, won the 2016 Graduate Student Research Award in Drug Discovery and Development Interface from the American Association of Pharmaceutical Scientists. She is one of only four annual winners, and along with her recognition came a $250 prize and paid travel costs to the AAPS annual conference in Denver last November. The research that earned Gogineni this award was presented in a paper titled “Phytochemical Investigation of Secondary Metabolites in Psychoactive Medicinal Plants for the Treatment of Neurological Disorders”.

Gogineni earned her undergraduate degree in India and her master’s in New Jersey before she found herself at the University of Mississippi. As neither her bachelor’s nor master’s program had offered much by way of research experience, she worked as a pharmacy technician for a year and eventually joined Dr. Mark Hamann’s research team as a visiting scholar. With Dr. Hamann, she published her first paper, which was a learning experience that gave her the technical knowledge and practical experience she needed to move forward.

“At every step, I feel very fortunate,” she said, “because I didn’t get anything the easy way. It was always hard, and I had to fight for it. Publishing with Dr. Hamann– that was my first publication in my life, and it took me almost three years to get there. But it was published in Chemical Reviews, which has an incredibly high impact factor of about forty-eight.” Impact factor is a quantitative tool for ranking academic journals, measuring of the frequency with which the average article in a journal has been cited in a particular period.

Her success with Dr. Hamann also gave her confidence. “That’s what I learned from him– being confident, and I never looked back. Dr. Stephen J. Cutler invited me to the Ph.D. program himself, so every step was important.”

First published in October, her award-winning research took place in a lab that focuses on isolation and structural elucidation of psychoactive medicinal plants. In this case, they collaborated with a lab in El Salvador to examine calea urticifolia, a flowering shrub known to have, in some species, hallucinogenic effects. The team hypothesized that the crude extract would prove to have opioid/cannabinoid effects on pain receptors, as that is usually the case with hallucinogenic plants.

Instead, they discovered this species inhibited monoamine oxidase. They conducted bioassay-guided fractionation, fractionating the crude extract and testing each fraction to see which parts retained the inhibitive properties. The compound responsible for the inhibition was discovered to be acacetin, a compound that was not previously known to have such properties. Acacetin, they discovered, showed a preference for monoamine oxidase-B, which means that it could be used to treat Parkinson’s disease and Alzheimer’s. The possibility for translating this discovery into a drug that could treat these two conditions make Gogineni’s work all the more exciting and relevant.

The next phase of Gogineni’s research will involve working on synthetic analogs of the compound to improve the preference to MAO-B. Realistically, this could lead to a new clinical drug, as there are currently only two clinical drugs for MAO-B selectors. The lab will also be examining the other compounds found in the crude extract. There were six other compounds originally isolated; three of them were known compounds, which they tested for unknown activities. One compound came up positive with anti-cancer activities, which was never before reported. The other three compounds were previously unreported, with similarly unreported properties. This research provides definite potential for another paper in the future.

When Gogineni begins her work with synthetic analogs, she’ll be using computational molecular modelling. This process examines the compound, looks at the crystal structures, and sees what types of amino acids are present surrounding certain enzymes. This way, the process isolates where researcher can best make changes in synthetic analogs to make the compound more effective. Gogineni has already planned what analogs she will prepare and how she will prepare them.

The future looks bright for Gogineni, who will be graduating next December. She has two review articles under review, and has been invited to write a book on antiviral diseases with Dr. Hamann with Springer Publishing. Recently, Gogineni completed a 10-week internship in St. Louis, shifting her research to work on proteomics— the study of all proteins expressed by a cell, tissue, or organism— the use of which she says will drastically increase in medicine.

On her interest in proteomics, she said, “It has the ability to grow, just as I do.”

During her time at the university, Gogineni made the most of every opportunity available to her. She was required to take ten classes but ended up taking fifteen, simply because others seemed useful and interesting. All of her requests to attend conferences were eagerly approved– often, she said, before she even finished asking– and she had many opportunities to present her research.

“The department never got frustrated with me,” she said. “Maybe one day they’ll say, ‘You’re too ambitious, you’re spending all our money,’ or something! But they’ve never said no before…I missed all of this in my undergrad and in my master’s, so now I feel like a child in a candy store, wanting to grab every opportunity I can. Because of that, I’ve never gotten frustrated with myself either; I’ve never felt like it was too much work.”

And her work has certainly paid off. The same week she traveled to Denver to receive her research award, she also attended a conference held by Sigma Xi, the Scientific Research Society, and won a medal in their Chemistry Division.

Christopher McCurdy, former interim chair of the Department of Biomolecular Sciences and Gogineni’s advisor, praised her award to Ole Miss News, saying, “It is a significant accomplishment to be recognized by the AAPS with a graduate student research award. These awards are highly competitive, and such recognition speaks to the quality of Veda’s research. She is a deserving awardee and serves as a great ambassador of our graduate program.”