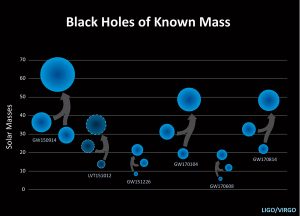 This graphic shows the masses for black holes detected through gravitational-wave observations (blue). These are the black holes known as of Nov. 15, 2017. Illustration courtesy of LSC/LIGO/Caltech/Sonoma State (Aurore Simonnet)

The event was detected using the U.S.-based Laser Interferometer Gravitational-wave Observatory (LIGO), the Europe-based Virgo detector, and about 70 ground-and-space-based observatories.

Following the event, multiple other forms of energy were detected such as X-ray, ultraviolet, optical, infrared and radio.

“This is really the beginning of multi-messenger astronomy,” said Marco Cavaglià, UM professor of physics and astronomy and principal investigator of the university’s LIGO group.

“Since the time humans have first gazed at the sky, people have just relied on light to learn about the universe,” Cavaglià said. “Today, we proved we can simultaneously observe a cosmic event using two different carriers of information: electromagnetic waves and gravitational waves. This is a revolution in astronomy comparable to Galileo’s first telescopic observations.”

UM researchers are excited that their related work assisted in the Nobel Prize being awarded to their colleagues.

“Kip and Rai are two of the most clever and kind people I ever had the honor of working with,” Cavaglià said. “[They] are always easy to talk with and humble, although they are among the best scientific minds of our time.”

“Rai wrote the first detailed document for the design of the LIGO interferometers in 1983,” said Katherine Dooley, UM assistant professor of physics and astronomy. “We call it the ‘Bluebook’ because of how accurately he predicted all of the noise sources for the detector.”

Weiss played a big role in Dooley’s path to earning her doctorate.

“He was the first person to sit me down and make me write an outline for my thesis,” Dooley said. “Rai was always an advocate for us students, and we appreciated that greatly. He wouldn’t hesitate to step in to protect our interests.”

Josh Gladden, UM interim vice chancellor for research and sponsored programs, expressed his excitement and congratulated the LIGO team members on their honor.

“As a physicist, the most exciting moment in my professional career was being on hand in Livingston, Louisiana, for the announcement of the first detection of gravitational waves,” Gladden said.

“We are so proud of the contribution that our physics colleagues have made to the LIGO effort and that the Nobel committee has honored this discovery with the highest prize in physics.”

Chancellor Jeffrey S. Vitter added, “We are so pleased that our physics department and research faculty have been an integral part of LIGO since 2007. … It is quite an honor for the University of Mississippi to play a role in this international collaboration of talented scientists and engineers, which is producing such astounding breakthroughs and now the Nobel Prize in Physics.

“Our participation in this collaboration is a stellar example of UM’s transformative impact upon our understanding of the world,” Vitter said.

LIGO is funded by the National Science Foundation, and operated by Caltech and MIT.