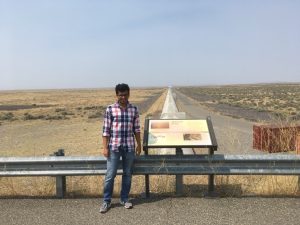 After submitting an entry to our #HowYouGrad contest, we were intrigued by Sumeet Kolkarni’s research and experience working at the Laser Interferometer Gravitational-Wave Observatory, or LIGO for short.

According to the Kavli Foundation, “LIGO is an ambitious physics experiment designed to measure gravitational waves reaching our planet from deep space. Gravitational waves are elusive ripples in the fabric of the universe. First predicted to exist in 1915, they escaped detection for a century. LIGO was designed to register the astonishingly tiny effects of passing gravitational waves here on Earth using a precise arrangement of mirrors, lasers, monitoring equipment and other advanced technologies. LIGO’s mission is to detect gravitational waves directly, use them to explore the fundamental physics of gravity and develop gravitational wave astronomy as a tool for science.”

Sumeet’s words speak for themselves, so here he shares about his exciting research:

“I’m a 2nd year grad student in the Physics and Astronomy department here, and I do research for the Ole Miss LIGO group with Prof. Marco Cavaglià. LIGO is the experiment to detect gravitational waves: ripples in spacetime caused by colliding black holes or neutron stars, among other things. There is one detector close to here in Livingston, Louisiana while the other is in Hanford, Washington. Currently, the detectors are making upgrades for the next observing run which will start in 2019. I visited LIGO Hanford during this commissioning phase to assist these upgrades and daily tests to see if the detector is functioning normally.”

“In particular, my field, labelled ‘Detector Characterization’, monitors hundreds of thousands of sensor channels looking at all sorts of noise which may affect the measurements. Detecting gravitational waves involves probing displacements much less than the size of a proton, so it is imperative to have a good idea of all things that can shake the experiment. The noise we study and monitor comes from ground vibrations, electronic components, strong winds, thermal vibrations, lasers and in one case, even thirsty ravens pecking on the ice forming in the cracks of the building! Overall, it’s a very complex but fun exercise that forms a nice link between the experimental physics of the detector and the astrophysical signals we want to pick out from the noise.”

His Professor Marco Cavaglià shares, “[Sumeet] has been a member of the LIGO Scientific collaboration for about six months, working under my supervision on a data analysis project. Specifically, he is trying to develop a method based on machine learning algorithms to clean LIGO data. When LIGO records a gravitational-wave signal, the latter may be partially corrupted by instrumental or environmental disturbances, what scientists call “noise” (not to be confused with acoustic noise, such as the noise in the Vaught-Hemingway Stadium after a Rebels touchdown!). In particular, Sumeet is working to develop an algorithm to remove sudden noise bursts, or glitches from the signals. Over the past few months, he also worked on other small projects with researchers at the LIGO Observatory in Hanford, Washington, where he visited for a few days in August. Besides research, Sumeet is also very active in outreach. He is an excellent science communicator and loves interacting with the public. He is always involved in our outreach activities, as well as in initiatives aimed to increase diversity in physics and STEM. Such a passion and enthusiasm for outreach is quite uncommon among young graduate students and really worthy of praise!”

While there’s much to learn about space-time, we know for sure that Sumeet is accomplishing many great things in his research.