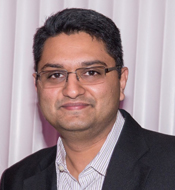 For Dr. Amit Patel, the process of coming to Oxford, Mississippi, was a challenging one. He received his Bachelor’s degree in Pharmacy while living in Mumbai, and when he and his wife were applying to graduate schools, they always knew the University of Mississippi was one of their top picks. His wife was promptly admitted to the Pharmacy Administration program just a few short months after her application. Patel, however, had to take a more circuitous route.

“My wife still teases me about how quickly she got in,” he shared.

With the University of Mississippi off the table, Patel pursued his Master’s at St. John’s University in Queens, New York, but he never gave up his original goal. He frequently came to visit his wife in Oxford, and as his Master’s program came to an end, he spoke frankly with the department faculty about what he would need to do to be admitted for his Ph.D.

“The faculty in the department is phenomenal,” he said. “We would get lunch and hang around a bit…and they gave me a list of criteria that I needed to meet so they could consider me.”

After retaking his GRE, he was granted conditional and then full admission into the program in 2001. Patel characterizes his path to the University of Mississippi as “an uphill battle”, but one that has proved to be well worth it.

Since graduating in 2006, Patel has pursued a career with Medical Marketing and Economics, LLC, an international biopharma strategy consulting firm in Oxford that was founded by one of his advisors. MME is largely concerned with helping biopharma companies develop the strategy around product releases, specifically prescription drugs, including market access, optimal pricing, and reimbursement. As director, Patel is called upon to travel frequently, at least a few days out of every week.

With business taking him around the country, Patel is sometimes greeted with confusion with regards to his southern base, often from other Indians who chose to settle in more metropolitan areas. Fortunately, he’s all too happy to defend the city where he and his wife have chosen to put down their roots.

In the last decade since his graduation, Patel and his wife have very much made Oxford their home. They both work at MME, along with several other Pharmacy Administration Ph.D graduates from the University of Mississippi. Their two children, a 3 year-old and a 6 year-old, were both born in Tupelo. And Patel has continued to be involved with the university, now as a professor.

Dr. John Bentley, formerly Patel’s research advisor and now his neighbor, was involved in the decision to offer him a position at the university. He said, “Because of his extraordinary involvement, enthusiasm, commitment, interest, and skill set, we offered Dr. Patel an Adjunct Assistant Professor position in our Department. He has adjunct faculty appointments at several other Schools/Colleges of Pharmacy as well. He is well-known among graduate students and potential graduate students, not just here, but abroad. He gives of his time to help others find success in our discipline…Just as he does now, as a student Dr. Patel went above and beyond the call of duty in all of his endeavors.”

Patel is proud of the work he does with the university, and he believes that the University of Mississippi’s program has only grown in recent years.

He said, “We’ve just improved and grown from where we were…I’m also faculty at St. John’s in Queens, in the School of Pharmacy, and I’m visiting faculty at the University of Toledo in Ohio.

I see these programs, and I compare and contrast them in my mind all the time. And all of these schools have their strengths, but we just knock it out of the park all the time, especially the Pharmacy Administration program.”

While the path to Oxford might have been a difficult one, it has been well worth it for Patel.

Of his success, he said, “It’s all because of the learning, the training, the people skills, all those things, from those five years. We either developed those skill sets here or polished them…We are where we are right now, and we’re happy. We love the town, and we love the faculty.”

And the feeling, according to Dr. Bentley is very much mutual. He said, “Dr. Patel’s curiosity, drive, imagination, intuition, interpersonal skills, volunteerism, and practical research experience and knowledge are some of his many admirable qualities and traits. He exemplifies what it means to be a loyal and involved alumnus. In addition to the many achievements in his relatively short career thus far, Amit is a wonderful person. He goes out of his way to welcome people and to help them feel that they are a part of our community. I am quite proud of Amit and it is a honor to call him my colleague and friend.”