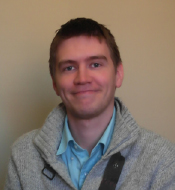 First-place winner of the annual Three-Minute Thesis competition’s Ph.D division is Mark McCauley, a Ph.D. candidate in biological sciences, focusing on coral reef ecology. His presentation pertained to soft coral and how changes in global warming, soft coral and ocean ecology are linked.

McCauley graduated with honors from the University of St. Andrews in Scotland in 2011 with a B.S. in zoology with a focus on marine mammal ecology. While at St. Andrews, he spent a year as an undergraduate researcher at the University of Richmond, studying what he describes as, “how some sponges can harbor intracellular dinoflagellates and testing their symbiotic thresholds.”

Early on, McCauley was largely interested in working with marine mammals, as reflected in his undergraduate degree and his time spent researching dual directional calls of mother and pup Antarctic fur seals (Arctocephalus gazella) while at St. Andrews. However, after graduating, he began looking more closely into coral reefs and decided to refocus his academic efforts in their direction, specifically toward soft coral.

“People know about coral reefs,” he said, “but when you think of coral, what you’re thinking of is hard coral. There’s a whole other type, and people really don’t know much about it, but it’s still very important.”

In 2013, he traveled to Universidad Nacional Autónoma de México to participate in coral-specific workshops, including “Light and Photosynthesis in Coral Reefs” and “Coral Reproduction to Reef Restoration.” Both of these workshops included technical training, as coral-related field work is largely dependent on diving.

At the University of Mississippi, McCauley works with Tamar Goulet, professor of biology, who remembers a specific diving-related incident fondly.

“While conducting field research in Mexico, [McCauley] texted his then fiancee, now wife, that a shark attacked him. She was at her wit’s end before he explained that, actually, a whale shark had bumped into him. Whale sharks,” she explained, “eat plankton, small shrimp-like creatures.”

Goulet has also worked with McCauley on a study called “UVR: A synergistic stressor for Caribbean gorgonian corals?”, which they presented at Symbiofest in Georgia.

Ultimately, McCauley’s research is geared toward examining how global warming affects soft corals and, in turn, their ecosystem.

“By focusing on dominant yet understudied corals, I am attempting to provide baseline data for the Caribbean and its species that will be severely affected as a result of increasing ocean temperatures,” he said.

McCauley said he hopes this research can be useful in guiding policy for environmental interaction and conservation.